How Does a Fire Alarm System Work? 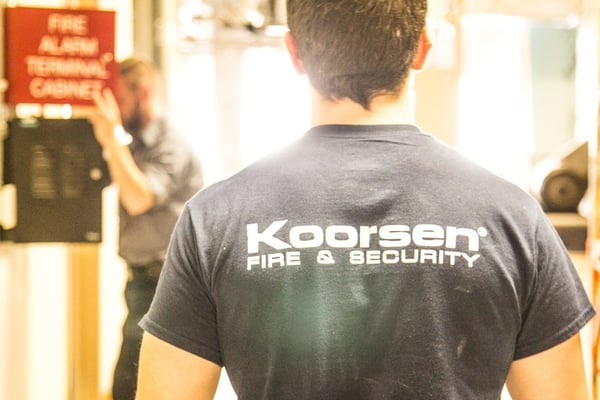 If you own, manage, or are building any type of commercial structure, you are likely all too aware of the codes which require your building(s) to have a working fire alarm system.

Yet many do not understand how these systems work and often confuse them with individual fire protection apparatuses, such as fire sprinklers or smoke detectors. But fire alarm systems are a far more comprehensive and complex approach to fire protection than any individual device.

In this blog, you will learn what the role and primary components of a fire alarm system are and the basics of how these components work together to protect your building and its occupants in the event of a fire.

What is the Role of a Fire Alarm System?

In the simplest terms, the role of a fire alarm system is to detect fires and alert both building occupants and emergency personnel from a centrally monitored and controlled location.

These systems also self-monitor, identifying where within the building(s) alarms originate from and detecting when errors occur in wiring and connections that may hinder the system from working correctly.

In essence, a fire alarm system has four key functions: detect, alert, monitor, and control. These sophisticated systems use a network of devices, appliances, and control panels to carry out these four functions.

What are the Parts of a Fire Alarm System?

As stated above, a fire alarm system is a collection of many separate parts, each with their own unique function. Knowing what these parts are and how they work together is necessary to better understand how the system works as a whole.

The following are the five key elements that make up every fire alarm system:

As can be seen, these systems can be as simple or as elaborate as a facility needs, and for each element listed above, there is a wide variety of options.

Creating or updating the ideal system for your facility can be a huge undertaking and should be done in consultation with experts like Koorsen and professional electricians who both understand the host of capabilities these systems and their parts offer as well as the local requirements of your AHJ.

The 3 States of Fire Alarm Systems

As mentioned above, the fire alarm panel monitors and indicates what state the system is in at all times. For most systems, there are three states of operation: Normal, Alarm, and Trouble.

When all devices, appliances, wiring, and circuitry are operating correctly, and no alarms are activated, the system is operating in a Normal State.

When an initiating device is activated, the system goes into an Alarm State. The indicating appliances will sound, alerting building occupants to the danger, and the alphanumeric display on the control panel will indicate from which zone of the building(s) the alarm is originating from so that emergency personnel can quickly respond to the correct area.

Should a short or open wiring develop in the circuits connecting the fire alarm panel and initiating devices, or within the panel’s wiring or zone cards, or if the system’s phone line connection is not functioning, then the system goes into Trouble State and is displayed on the control panel. The panel will indicate which zone the issue is in, and a buzzer will sound to alert maintenance personnel to the problem. While the buzzer is loud enough to be heard, it is not nearly as loud as the indicating appliances and will not be confused with an actual alarm.

How Do Fire Alarm Systems Detect a Fire?

The way a fire alarm system detects a fire is through its initiating devices, discussed above.

When a fire starts, the smoke or heat will activate one of the initiating devices, or someone will activate the manual pull station, alerting the fire alarm system to the fire and putting it in alarm mode.

What Happens Once the Fire Alarm System is Activated?

Once the system goes into alarm mode, two things should happen:

In some fire alarm systems, it may also activate fire suppression systems to help fight the fire until emergency personnel arrives.

How Do You Disarm a Fire Alarm?

It is important that the building manager or maintenance crew understand how to read and use the fire alarm panel, especially if it is in trouble state or is experiencing false alarms.

On the touch pad of the control panel, there are alarm and trouble silence options as well as a system reset option. These should only be used once the source of the alarm or notification has been identified and can be correctly addressed.

Effectively protecting your facility against fire is pivotal to protecting the lives within it and the investment that it represents. But as should be evident, designing and implementing these systems is no easy task.

Don’t leave the safety of those in your building and your investment up to chance. The team at Koorsen Fire & Security has been in the fire protection business for over 70 years and has served a wide variety of business types, from medical to industrial to educational and retail.

Koorsen understands how the unique environment and proceedings of each business impact the fire protection required to protect the facility and its people. Furthermore, they are experts in working with the codes and local authorities to ensure that you won’t be hit with unwanted snags and fines in your building and inspection processes.

If you are getting ready to build, or if your current fire protection system needs updating or maintenance, don’t wait – give the experts at Koorsen a call today.