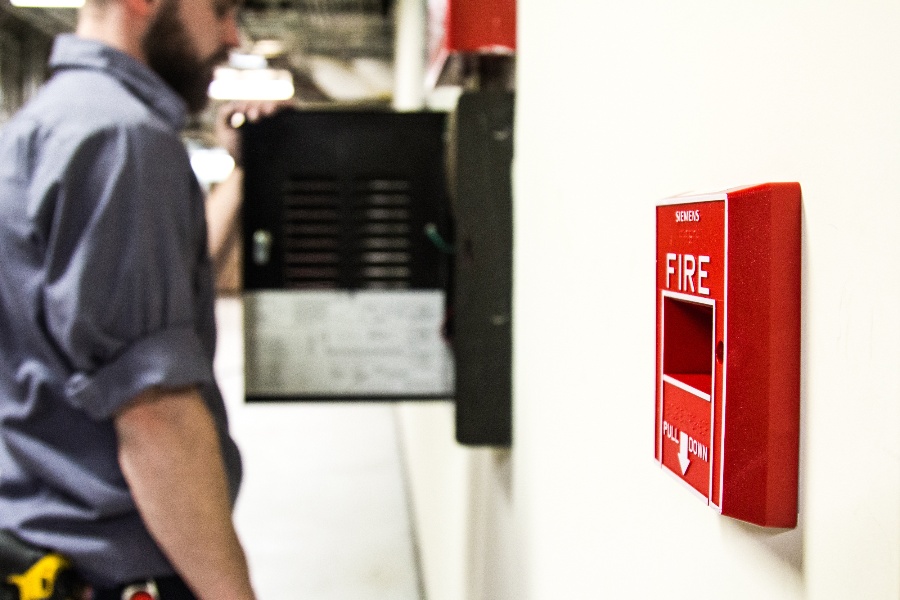 When installing a new fire alarm system or upgrading your existing system, understanding the difference between the two main types of systems on the market today – conventional and addressable systems – can have a significant impact on your company’s bottom line.

The main difference between them is how the signals from connected devices communicate to the main control panel. Cost is often the primary factor in choosing a new fire alarm system. However, initial costs can be deceiving. The key to choosing the best one for your business is knowing the differences between the two and how those differences impact the lifetime cost of the system as well as the safety it provides. This post will explore both types of systems and offer several factors that you should consider when choosing the best system for your business.

Conventional systems are hardware-based and use analog technology. Conventional fire alarm systems are made up of zones. Multiple devices, both initiating and notification devices, make up a zone which connect to the main control panel. Conventional systems are analog in that they use electrical currents to communicate with the control panel. Initiating and notification devices are designed to dramatically increase the current in the circuit (the amount of electricity flowing through the wires) any time the environmental conditions (heat or smoke) in the area of the sensor exceed a predetermined threshold. This change in the current is communicated to the control panel to trigger the alarm.

Because a conventional system relies on individual circuits to communicate with the control panel, the information the panel can receive is limited to the number of devices it can support. The information is also limited in the sense that it only tells the panel whether a device has been activated or removed, not which device or where.

Instead of relying on changes in the electrical current running through a circuit in a conventional system, with an addressable system digital technology transfers information from the connected devices to the main control panel as binary code – combinations of ones and zeros.

The binary code starts as an analog signal created by variations in voltage within the signaling device. With an addressable device, there is a “mini-computer” that converts these variations into binary code. Depending on the device and the types of information it is designed to convey, an addressable device can transfer a wide variety of critical information to the control panel as opposed to the single triggering signal that conventional systems provide.

The most important type of information that addressable systems transmit is exactly where the fire is occurring in a building. Because the exact location of each device in an addressable system is programmed in, firefighters know before they even arrive precisely where in the building the fire is occurring, which allows them to respond more quickly to a fire. With a conventional system, unless the area in which the system is protecting is a single room, the firefighters will have to spread out to locate the fire.

In today’s digital world, people often think of analog devices or systems as old fashioned or outdated technology. Conventional fire alarm systems have indeed been around a long time. Many businesses today still use them. And, while newer technologies now exist, conventional systems remain a good option in some settings.

Conventional systems are highly reliable, cost-effective, and affordable for small buildings where just one or two zones could cover the entire area. However, more and more small businesses are beginning to consider addressable systems when it comes time to replace their systems for additional benefits that the newer technology provides.

If you’re considering a new system for your business, the key to selecting the right one is to look beyond the initial costs when evaluating the lifetime value of the system. There are other costs associated with each type of system that may make one a better choice than the other. A closer look at some of the key differences between conventional and addressable systems can help you make a more informed choice when investing in a new fire alarm system.

False alarms are always an important consideration when choosing a fire alarm system. False alarms are expensive for fire departments in terms of fuel costs, wear and tear on firefighting equipment, wasted time, and the risk of collision and injury when traveling to the scene. Not surprisingly, many jurisdictions now impose fines for false alarms, which can add up quickly for a small business.

False alarms are far more common with conventional systems because the accumulation of dust and other contaminants on the sensors can send false signals to the control panel. These can be difficult to avoid with conventional systems because there is no way to know if the alarm is false until first responders have arrived and determined, after physically seeking out the detector that triggered the alarm that contamination was the culprit.

Without a doubt, addressable systems provide a greater level of fire safety because they allow firefighters to respond more quickly and effectively by pinpointing the exact location of a fire in a building.

The fact that addressable systems have fewer false alarms than conventional systems can also help to ensure people take every alarm seriously. When nuisance alarms become common, people begin to ignore them, which can have deadly consequences in the event of a real fire.

An addressable system is generally more reliable than a conventional system mainly due to how the different systems are wired. With a conventional system, if a device’s wire is damaged or severed, its signal and the signal of other devices down the line cannot be transmitted to the control panel.

Addressable systems provide a great deal of flexibility in comparison to conventional systems. While the number of devices either system can accommodate is determinant on the manufacturer of the alarm panels, every type of device added to a conventional system requires a new circuit.

Because they require less wire, an addressable alarm control panel can accommodate far more devices than a conventional system. They can have anywhere from one to 30 loops, commonly referred to as a signaling line circuit (SLC), each of which can monitor and control several hundred devices.

Even for small buildings, the lower initial costs to purchase the equipment needed for a conventional system are often offset by higher installation costs. Remember that conventional systems require a single circuit for each zone, one which can lead to much more complex wiring than an addressable system in which all the devices are wired into a single loop. This increase in complexity not only drives up the cost of installation but also introduces a greater risk of human error.

While both types of systems require regular inspections and testing, trouble-shooting and maintenance are easier and less expensive with addressable systems. With independently wired zones in a conventional system, each device must be checked separately to find the problematic device. Addressable devices can send maintenance alerts and trouble signals to the control panel to make finding problematic devices and getting them repaired or replaced much faster.

Which is the Best Fire Alarm System for Your Business?

While it might seem obvious at this point that an addressable system offers a better, more cost-effective design, the fact is that not every business has the budget for such a system. The best advice is to contact your local Koorsen Fire & Security branch. We have decades of experience in working with both types of systems. Koorsen has NICET-certified technicians that receive continual training on all brands of fire alarm systems and stay on the cutting edge of evolving fire alarm technologies. Contact us today for help in choosing the best fire alarm system to fit your needs and budget.