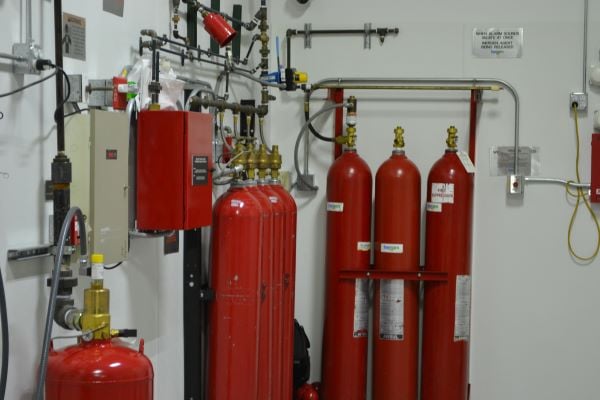 Constructing a new building and wanting to make sure you effectively protect your sensitive equipment and materials from the devastations of a fire? Or perhaps you are in an old building with its original fire protection systems wanting to protect and preserve your new server room in the event of a fire.

Whichever your situation, if you are in the market to find the right fire suppression system for your business or facility, a better understanding of the basics of what these systems are and what varieties are available will help you make the right choice for your unique situation.

Read on for a quick definition of what qualifies as a fire suppression system, a brief history behind their development, and an explanation of the varieties that are now available for even the most sensitive environments and equipment.

What is a Fire Suppression System?

In short, a fire suppression system is, to a degree, precisely what it sounds like – a system used to suppress and/or extinguish a fire within a building.

Note that fire suppression systems are different than fire sprinkler systems. Fire sprinklers always use water in copious amounts to extinguish and/or control a fire. Water damage to the contents of the room/building can often occur as a result, but lives are saved, as is the structure.

With fire suppression systems, however, they use other types of suppressing agents besides water. These suppressing agents include CO2, chemical, or inert gases. As discussed in detail below, these agents have unique properties that are ideal for protecting sensitive equipment and contents within a building even while suppressing a fire.

A suppression system aims to take action before a fire gets a chance to grow and spread, truly minimizing potential damages. This often means that these systems activate at a much earlier stage in the fire’s development than do fire sprinklers.

How Long Have Businesses Been Using Fire Suppression Systems?

Fire sprinkler systems have been around since the late 1800s. But, believe it or not, some of the first fast-acting fire suppression systems appeared not much longer, even as early as 1910 when the Pyrene Manufacturing Company of Delaware filed a patent to use carbon tetrachloride to extinguish fires.

World War II spurred their development as air forces were losing a significant percentage of aircraft to fire. Carbon tetrachloride, a dry chemical, was the common fire suppressing agent of choice. However, over time, it was discovered that it caused severe health effects.

By the early to mid-1960s, another option was developed, and “clean agent” systems (more on that shortly) appeared. The first “clean agent” chemical developed was Halon 1301, which could more effectively suppress fires without leaving a residue behind and seemed to have no harmful effects. For about 20 years, Halon systems reigned supreme in the fire suppression industry.

However, by the 1980s, Halon 1301 came under fire for potential negative consequences to the environment. Since the ’90s, between the demand for even better, more precise agents for each unique industry and the demand for environmentally friendly agents, a wide variety of fire suppression and clean agent systems have been developed.

What Types of Agents are Used for Fire Suppression?

As clean agent fire suppression systems are the highest in demand and have a wide range of applications, the rest of this post will explore these systems in greater detail.

What is a Clean Agent?

A clean agent is a gas-based agent that is electrically non-conducting and which leaves no residue upon evaporation.

This is what makes the clean agent systems special. While some of the above-mentioned fire suppressing agents would not be safe or effective to use around electrical and sensitive equipment and materials, a clean agent is.

Among the category of clean agents, there are two main types:

As may be evident from the above descriptions, a “clean” agent is called this because it leaves no residue or substance behind. This means it is far less likely to cause property damage due to discharging, so property owners don’t have to worry about saving their sensitive equipment from the fire only to have it destroyed by the fire suppressant.

Furthermore, because clean agents discharge in gas form, they are non-conductive and, therefore, effective in suppressing electrical fires, unlike water, which spreads the electrical current (which is a hazard in and of itself) and potentially sparks a new fire.

A final quality to note about clean agent systems is that they activate when a fire is in its incipient, smoldering stage, well before temperatures rise to extreme levels and the fire truly grows. This minimizes the damage that could even be done since it suppresses the fire well before it even becomes a dangerous fire and well before a fire sprinkler system would even be activated.

Essentially, facilities and businesses that cannot afford to lose their sensitive electronic equipment because of the value of the hardware and the value of what may be stored on that hardware (the data necessary to run the business) rely on clean agent suppression systems. These systems activate well before the heat from a fire could do serious harm to the sensitive equipment and suppresses the fire with an agent that won’t itself cause damage.

In addition to these industries, you will also find clean agent systems in places like museums, libraries, archives, and the like. The materials they store would be damaged and lost if covered in water, foam, or other suppressing agents that leave a residue.

Clean agents are safe for use in human-occupied facilities.

When clean agent systems are properly designed to have the correct concentration of chemicals/gas for the space it is protecting, a person who happens to be stuck in the area at the time of discharge may have adverse effects due to their human makeup, but in most cases, once the person is exposed to fresh air, those effects can go away. Still, they should not be severe or long-lasting in most cases. But it is always a good idea to seek medical attention as a safeguard. The systems are tested and regulated by the NFPA to have limited adverse effects on anyone exposed.

At the worst, typically, exposure to the chemical agents can cause lightheadedness, dizziness, and general feelings of being unwell, which will likely be short-lived depending on how long a person is exposed. There can also be some cardiac sensitization elements that may cause additional concerns for someone with heart conditions, but should still be minimal.

A possible exception would be for an individual who happened to be right by a discharge nozzle when the system activates. In their case, exposure to the agent would not necessarily cause complications, but they could get frostbite because of the freshly discharged gas's cold temperature.

Generally speaking, clean agents are safe, and exposure is unlikely to cause noticeable adverse effects. However, it is always important to remember that there are many variables regarding the unique setting and the system’s needed concentration levels, the agent, and the individuals' physiology and their level of exposure.

What about Halon? Is it Used Anymore?

During the 1980s, scientists observed what they believed to be a hole in Antarctica's ozone layer. They began investigating to determine the cause and concluded that many man-made chemicals, such as salt sprays and refrigerants, were causing the depletion of the ozone. One of the substances that they identified as a culprit was the bromine molecules within Halon 1301. Interaction with sunlight was found to cause ozone depletion.

As a response, in 1987, the Montreal Protocol listed chemicals that should cease to be made, and by 1994, the production of Halon 1301 was discontinued entirely.

Each country has handled phasing out Halon in its own way. In the United States, businesses were not required to phase out their Halon systems if they had them. They simply could not purchase new Halon systems, and new facilities had to find something else.

Some businesses have maintained their old Halon 1301 fire suppression systems and actively rely upon them, meaning that the chemical is still used to a degree.

However, since no new Halon is produced and Halon-based systems have not been made in over 20 years, parts for the old Halon systems are scarce, making repairs on these systems increasingly difficult. And while there are some companies with left-over supplies of Halon who specialize in recharging Halon-based systems, that resource is undoubtedly limited and depleting as well.

Consequently, it will not be much longer before even those with old Halon 1301 systems will need to upgrade to newer systems, as the chemical disappears from use entirely.

Clearly, there is a wide variety of options to consider when choosing the right fire suppression system for your situation. The right one is for you all depends on the applications you need and the facility, occupants, and materials you have to protect.

At Koorsen Fire & Security, we have been in the fire protection industry for over 70 years – longer than most of these systems have existed. We can help you with all of the ins and outs of fire suppression systems and help you choose the very best one for you.

Give Koorsen a call today to get started.

Contact Us for All of Your Fire Suppression System Needs!

What Are Fire Suppression Systems?
Fire Pump Testing and Inspection Requirements
Fire Prevention and Safety in the Workplace
What Is Carbon Monoxide Poisoning and How Do I Prevent It?
What Types of Buildings Require Fire Alarms?