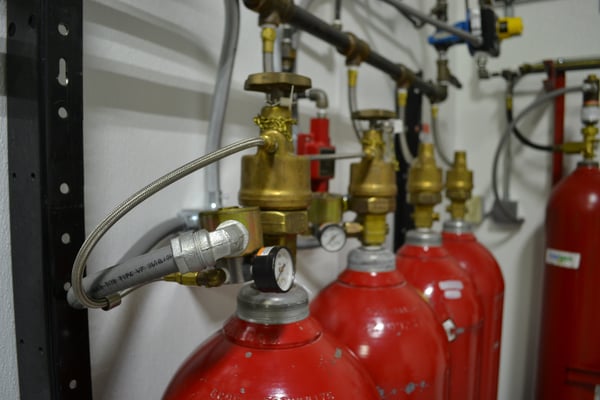 Most clean agents used for fire suppression systems today are very eco-friendly. However, halon is not. Halon substances, which are still in use in many older systems today, have been found to have very high ozone depletion properties.

The use of halon for fire protection systems was first introduced into the market in the mid-1960s and quickly became the industry standard for protecting high value-assets from fire. And, by the 1970s, halon-based systems were one of the most prevalent types of fire suppression systems in the country

In 1987, the United States signed the Montreal Protocol – a global agreement to protect the stratospheric ozone layer. And in 1994, the U.S. banned the production of halon under the Clean Air Act. As a result, the fire safety industry began looking for alternatives to the Halon-based compounds used in many clean agent fire suppression systems at that time.

While it is still legal to purchase and use recycled halon, eventually, the diminishing supply will require businesses with halon-based fire suppression systems to replace their Halon systems. This presents a dilemma for businesses that still use such systems, one that we will explore in this post.

The Use of Halon in Fire Suppression Today

Halon 1211 (also known as BromoChlorodiFluoromethane (CBrClF2) or more simply just “BCF”) is a multipurpose clean agent rated for Class A, B, and C fires. This type of halon is more commonly found in fire extinguishers. Halon 1301 (also known as bromotrifluoroethane CBrF3)) is more limited in its effectiveness and is typically used in fixed installations to suppress Class A, B, and C fires.

Today, the only source of halon for use in fire protection is recycled halon. The Halon Alternatives Research Corporation (HARC) has coordinated development of an Industry Code of Practice for the best use of recycled halon since 1989. Their Recycling Code of Practice (RCOP) provides basic guidelines for companies engaged in the recycling of halon to promote safe handling, prevent contamination, and minimize emissions.

In a 2002 report, the United States Environmental Protection Agency (EPA) provided a snapshot of the progress that the industry and the government had made up to that point in replacing halon fire extinguishers and systems with non-ozone-depleting alternatives for fire protection.

At that time, very few private sector businesses were replacing their halon systems, and the use of alternatives was generally limited to new applications, such as in a new building or an operation undergoing a complete renovation. The report also found that portable halon fire extinguishers were still in widespread use and because they require relatively little halon, they were still commonly being recharged as opposed to being replaced.

Are You Required to Replace Your Halon System?

The short answer is no. While the production of halon has been banned, its use in existing systems remains legal. In response to the continued use of halon, the National Fire Protection Association (NFPA) has published the Standards and Codes of Practice to Eliminate Dependency on Halons to help the fire protection industry and the businesses they serve better understand the issues posed by halon fire protection systems and develop strategies and best practices for their use.

According to this guidance, halogenated agent systems should only be used in areas where:

Essential applications are defined as defined under the Montreal Protocol are those in which:

Whether your halon system meets the criteria for an essential use or application or not does not mean that you are required to replace it, at least not yet. Eventually, though, the fact is that you will be forced to, not by regulation but simply due to a lack of availability of halon to maintain it. All systems eventually fail, and being proactive in this regard can have a number of benefits. 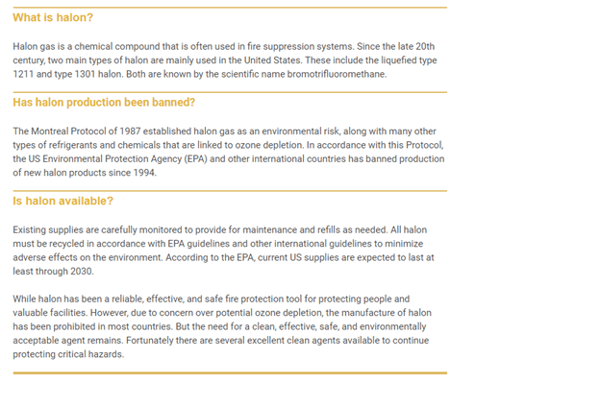 When Should You Consider Replacing Your Halon System?

From a purely environmental standpoint, the answer to that question is “yesterday.” However, businesses that do not consider all the costs versus benefits of their investments do not stay in business for very long.

There are a number of important factors to consider in deciding when to replace your halon-based system. The costs to maintain it is an important one. Due to the finite supply and expense of halon gas, these systems are becoming increasingly difficult to maintain. Basic economics dictates that when supplies decrease while there is still a demand, prices will go higher. So, the cost of halon is only going to continue to increase over time.

In addition, if you have an unwanted discharge or a leaky cylinder, you may not be able to get the product needed to bring it back into compliance. Because Halon systems are no longer manufactured, the parts to maintain them (rebuild kits, special o-rings, etc.) are no longer available by manufacturers, which can cause delays when repairs are needed. Also, manufacturers no longer provide support or flow caluclations which can cause issues as newer equipment may not function with older systems. And, there are other costs to be considered, such as those associated with meeting fire watch regulations during whatever amount of time your system is down.

The real question that every owner of a halon system needs to ask is whether it makes sense to invest in maintaining an outdated and increasingly costly system on borrowed time or on modern technology – one that will meet their business needs in a more cost-effective way well into the future? The answer to that question is not always a simple one and can vary from business to business based on a number of factors. These factors can include downtime, lack of confidence from customer base, lost revenue that may not be known until it’s too late, and insurance rates to name a few.

There are several good alternatives to halon-based systems on the market today, which include 3M™ Novec™ 1230 Fire Protection Fluid – the first product on the market to boast no negative environmental impacts – and inert-gas systems.

If you are considering whether to replace your current halon fire suppression system, Koorsen’s expert technicians can help you evaluate the potential costs and benefits of doing so. We can also help you maintain your current system to whatever extent possible while you determine the best way to proceed.