How to Fix Beeping Smoke Detectors? 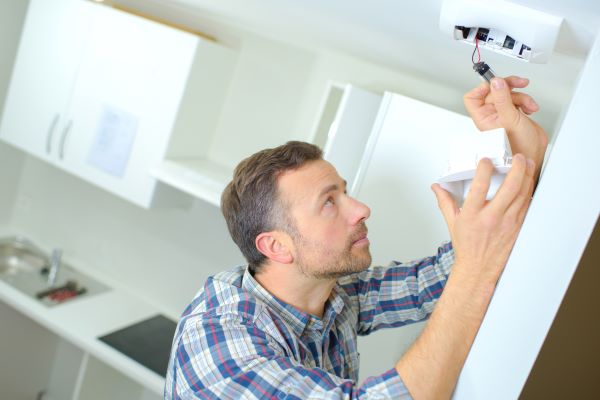 Is your smoke detector beeping?

Whether it’s the single, periodic chirp that pierces the quiet while you’re trying to sleep or the heart-stopping, ear-drum-splitting beep of the alarm, if there is no actual fire emergency, it quickly becomes obnoxious.

But, since smoke detectors play a significant role in keeping your family and home safe, it’s important to properly correct, rather than ignore or disable, a beeping smoke detector.

Why is the Smoke Detector Beeping?

There are numerous reasons why your smoke detector may be beeping:

Though it may be difficult to tell what the specific cause of your nuisance smoke detector beeping is, there is a series of relatively simple steps you can take to identify and correct the problem.

Correcting beeping or alarming detectors depends on two things: first, the reason it’s beeping; second, the type of smoke detectors you have – hardwired or standalone.

If your smoke detector is not just beeping periodically, but sounding an actual alarm, and you have made sure there is no real fire, then you are experiencing false, or nuisance, alarms.

There are a few potential causes for false alarms, and the way you correct your detector depends on the cause:

Please note that if you have interconnected smoke detectors, you will have to find the initiating detector to silence all of them and to correct the issue. In some systems, the initiating detector will have a blinking light while they are sounding, but you may have to go to each unit and utilize the “Test/Hush” button on each before finding the one that initiated it. If the alarm stops before you can find the initiator, you will need to use the owners’ manual to help locate it.

For standalone detectors, you will only have one detector activating at a time.

If your detectors are emitting a single beeping or chirping sound every minute or so, this is most often an indicator that they either need new batteries or have lost power or diminished power.

If you have changed the batteries and tried the circuit breaker, but the beeping persists, you may need to try resetting the detector(s):

If changing the batteries, checking the power, and resetting the detectors STILL does not resolve the beeping, there may be dirt and debris interfering with the detector’s sensors.

What NOT to Do with a Beeping Smoke Detector

The above are all of the proper ways to handle nuisance alarms and incessant beeping from your life-saving smoke detectors.

However, far too frequently, people are tempted to mishandle the alarms, putting their home and family at risk. The following are things NOT TO DO with a beeping smoke detector:

While all of the above will stop the beeping, it will only treat the symptom (the beeping), not the problem, and will leave you and your loved ones at risk.

What About Commercial Smoke Detectors?

Perhaps the smoke detector beeping you are concerned about is in your workplace. If that is the case, be aware that most commercial smoke detectors and fire alarm systems have an alarm panel that should be notifying the owner of a faulty smoke detector in need of attention.

As commercial systems are much more complex than the average home system, it is best to call Koorsen Fire & Security to get professionals out to service the faulty smoke detector and ensure the system is in proper working order.

Still, have questions? The team at Koorsen Fire & Security would be happy to assist you. Give them a call today.