What is the Fire Alarm Inspection Process?

As the sun begins to rise on a sunny spring day in Indianapolis, one of the Koorsen Systems Inspection Technicians contacts the monitoring station and the fire department to inform them that Koorsen will be inspecting and testing the fire alarms at a 76-acre, multiple building school campus located on the eastside of Indianapolis. This is obviously a very important step because as the fire alarms are tested, you do not want the fire departments to waste their resources on the false alarms.

It Takes Two to Inspect

Once the authorities have been notified that inspections and testing will be taking place, the technicians grab their tools and enter one of the many buildings on the campus to inspect. Today is the last day of inspections for this school. There have been multiple teams at this campus for the past week and a half that have been inspecting and testing the fire alarms in several buildings. 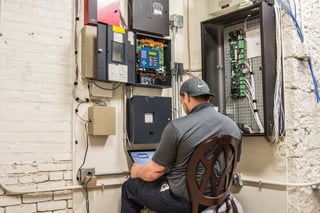 Start at the Top

In this older building, the first technician is stationed at the fire alarm panel located in the basement, while the second heads up to the attic to start inspecting and testing the fire alarm components. The technician heading to the attic states that it’s good to always start at the top of buildings and work your way down, ensuring that every smoke alarm and pull station is tested. The technician climbs an old narrow stairs and arrives in the attic where it is warm but not unbearable, as it is just the end of March.

There is also an alternative method that Koorsen technicians use to test smoke detectors that doesn't require a pole. This method uses an aerosol can with an extendable funnel on it to direct the "fake smoke" towards the smoke detector. 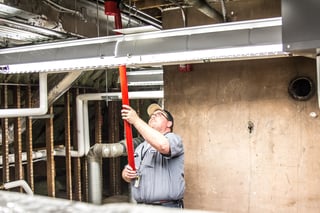 At the fire panel, the other technician checks to see that the smoke detector was activated and that it has identified with the proper location. Ensuring the detector’s location is identified correctly is essential, as firefighters and first responders will know exactly where the fire is located in the building when they arrive. The technician in the attic then moves on and checks each and every smoke detector on the floor. Sometimes it seems as if the smoke detectors are playing hide and seek, as the technician bends and twists around ducts and piping and low ceilings to search for “hidden” smoke detectors.

The next thing the technician checks before moving on to the next floor are the fire alarm pull stations. You may be familiar with pull stations from grade school when a defiant kid would pull the alarm, causing the entire school to evacuate the building. This usually seemed to happen during the coldest or hottest day of the year. The technician informs us that many of the school systems put blue dye on the pull handles, which makes it easy to identify the culprit of false alarms. 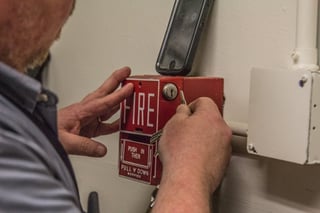 On to the Next Floor

After inspecting and testing the fire sprinkler components, the smoke detectors, and the pull stations; the Koorsen technician moves onto the next floor. The same inspection and testing process is performed at every floor until he finally reaches the basement where the fire panel is located. Once in the basement, the technician performs the same inspections and testing until every smoke detector and pull station are accounted for. 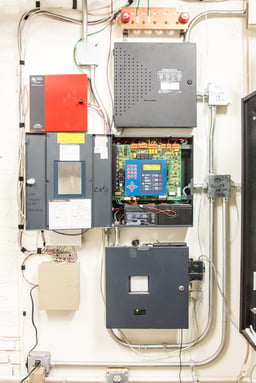 To learn more about the services, inspections and products Koorsen Fire & Security offers or to schedule an inspection, contact a Koorsen associate today.

Contact Us for All of Your Fire Alarm Needs!