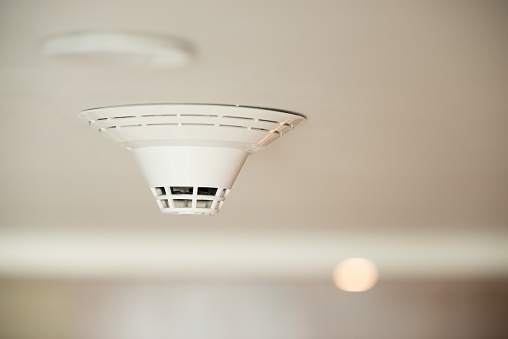 While smoke alarms are found in nearly every building you enter, including your own home, they are often taken for granted.

In fact, there are a lot of potentially harmful misconceptions about the role and function of smoke alarms, as well as a general lack of knowledge.

So, for your edification, here are the top 4 things to know about smoke alarms:

1. Smoke Alarms DO NOT Serve the Same Function as Fire Sprinklers

Perhaps one of the most important things to know is that your smoke alarm and your fire sprinkler serve completely different functions, but are both vitally important to the safety of your property’s occupants and assets.

Your smoke alarms function as an early warning system, telling you and everyone in the building to get out. A fire sprinkler, on the other hand, will actually respond to the heat caused by a fire by activating and dousing the fire with a suppressing agent.

If you have a smoke alarm system but do not have a properly functioning fire sprinkler system, your building will not be protected from the fire.

2. There is More than One Type of Smoke Alarm

There are multiple types of smoke alarms. This is important as fires, depending on how they are ignited and what fuel they are burning, do not produce the same type of smoke to trigger an alarm.

The two most common types are:

When smoke infiltrates the chamber that contains the plates, the ions creating the  electrical charge are disrupted, and the electrical current is lost, which activates the  alarm.

Ionization smoke alarms are very sensitive and are ideal for what is called flaming fires –  fires which do not produce a lot of smoke. These alarms are also great for early fire  detection.

Photoelectric smoke alarms are ideal for smoldering fires – fires which produce a lot of  smoke.

3. NFPA & US Fire Administration Recommend You Use Both Types of Smoke Alarms

Because smoldering fires and flaming fires are equally common and equally responsible for injuries and loss of life, both the NFPA and the US Fire Administration recommend that properties be protected by both types of alarms.

Fortunately, if that sounds a bit too much or too confusing, there are now hybrid, or combination alarms, which use both types of smoke detection in a single smoke alarm.

4. Your Fire Alarms Must Be Tested Yearly

To truly ensure the safety of your property and all of the people working or living inside of it, the NFPA does require that your smoke alarm system be tested at least annually to ensure it is functional and up to code.

There may be additional local and state laws regarding additional tests and maintenance as well. If you are unsure what your local area requires, contact your Authority Having Jurisdiction (AHJ) or the professionals at Koorsen Fire & Security, who can answer your questions and ensure you are up to code.

The consequences of not adhering to these regulations can be fines, as well as potentially malfunctioning smoke detection systems which could lead to costly false alarms, or worse, injury or loss of life in the event of an actual fire.

Are Your Smoke Alarms Ready?

What type of smoke alarms do you have protecting your property? Are they the ideal type for your building? Are they fully operational and up to code?

If you aren’t sure, don’t wait for an emergency to find out. Call the experts at Koorsen today to ask questions and arrange for one of their expertly trained technicians to come inspect your system.