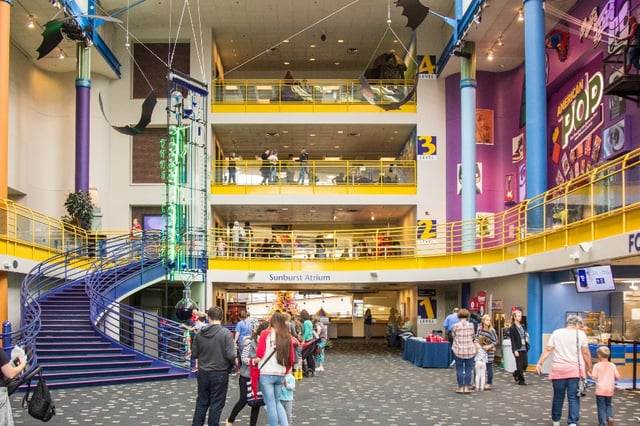 From dinosaurs to carousel horses to space ships and more, The Children’s Museum of Indianapolis is the largest children’s museum in the world. Founded in 1925, the museum houses more than 120,000 artifacts and specimens throughout its 472,900 square-foot facility.

Over 1.2 million kids of all ages walk through the museum’s doors every year where they explore ancient cultures, foreign lands, far off galaxies, and 65-million-year-old dinosaurs. To help protect the visitors, the staff, and all of the priceless artifacts from fire, The Children’s Museum of Indianapolis turns to Koorsen Fire & Security.

Since 1999, Koorsen Fire & Security has been working with The Children’s Museum of Indianapolis to protect it from fire. Koorsen started out servicing and inspecting the museum’s Ansul kitchen hood suppression systems. The museum has multiple grills and cooking appliances throughout its cafeteria area that are protected by three hood suppression systems.

It usually takes a couple days for a team of two technicians to inspect and check the many smoke detectors, pull stations, horns, and strobes of the fire alarm system in this vast museum. While the quarterly inspections are usually done during open hours, the last inspection of the year is always done after hours. This allows the technicians to test the horns and strobes without causing any disruptions or panic among the visitors.

The Children’s Museum does present a unique challenge that Koorsen technicians typically don’t see in most other businesses. That challenge is working around priceless artifacts. While the technicians are always very careful and aware of their surroundings when working in any business environment, there’s a little more pressure when working around irreplaceable objects like Fireworks of Glass, a 43-feet high, 3,200-piece blown glass sculpture by Dale Chihuly.

Koorsen is excited about this new partnership and looks forward to supporting the museum in many ways moving forward. Recently, Koorsen sponsored the latest exhibit DANCE!, a multigenerational exhibit that lets young and old alike explore dance styles through the ages and around the world. The exhibit will be open through April 2018, so make your way to the DANCE! exhibit before the last dance ends.

The most recent event Koorsen participated in was Fire Prevention Week in October. Koorsen staff was on hand teaching fire safety tips and the Koorsen Kasey Program also visited the museum during this time. The Kasey Program consists of retired firefighter, Jeff Owens, and his two black Labradors. They visit around 400,000 children a year to teach them valuable fire and life safety skills in an entertaining and memorable way.

Protecting, Enjoying and Participating in Everything the Museum Provides

Koorsen Fire & Security has been proud to be a part of The Children’s Museum of Indianapolis over the years in its various roles. Koorsen employees have been dedicated to protecting this great museum and its millions of visitors since 1999. The employees and their families have been avid visitors of the museum for even longer.

If you are looking for something fun to do with the family the next time you’re in Indianapolis, Koorsen Fire & Security can’t recommend enough The Children’s Museum of Indianapolis. It’s a great destination for kids of all ages and Koorsen is proud to be an ongoing partner of theirs.

To learn more about how Koorsen Fire & Security fire protection, life safety and security solutions for your business, contact them online or call them at 1.888.456.8038.