What Is Hydro Testing? 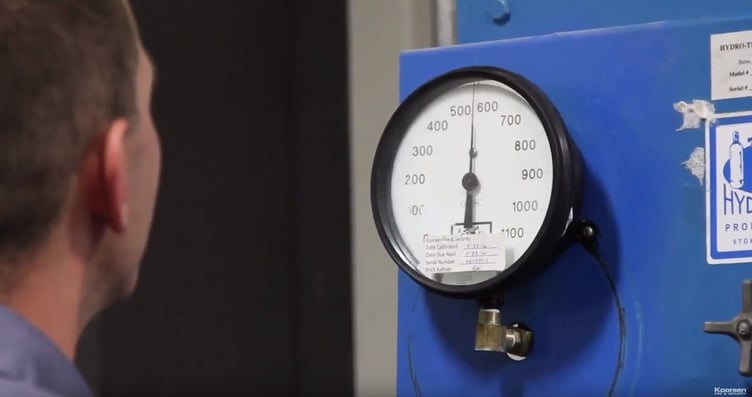 If your business has a fire extinguisher, as all should, you hopefully know that the DOT and/or NFPA requires it to be hydro tested every few years.

However, did you know that other types of cylinders, such as Scuba cylinders, SCBA cylinders, and others, also require hydro testing periodically throughout their life?

So, what is hydro testing, and why is it required?

For over 26 years, Brick has worked as a full-time fireman for Plainfield. He has also worked for Koorsen on his off days for the past 20 years.

During his first 15 years with the company, Brick worked as a shop technician but moved to Koorsen's elite training center approximately five years ago and has become one of the company's lead trainers.

He teaches shop technicians a host of important skills they need to do their job, from teaching about hazardous materials for fire extinguishers and clean agent systems to aerial lift and forklift training, height and ladder safety, confined space training, and other key safety skills.

But his main job is training shop technicians on hydro testing.

What is a Hydro Test?

A hydro test is simply a way of testing a cylinder's integrity, such as those used for fire extinguishers and fire suppression systems. The test must be performed by professionals in a shop with appropriate equipment and safety procedures.

The test ensures that the cylinder can still safely withstand the required service pressures necessary to make it operable and ensure it has no leaks or other deformities that would inhibit its effectiveness.

How is the Hydro Test Performed?

To perform the test, the cylinder is first emptied of its extinguishing agent and visibly examined on both the outside and inside. Technicians will look for dents, cracks, rust, and any other signs of damage.

The cylinder will then be filled with water and pressurized to the required pressure for that cylinder, typically five-thirds of its operating pressure. The pressure must be maintained for a specified time, typically between 30-60 seconds, depending on the cylinder type.

It will expand due to the pressure, and that expansion is measured both at the peak of the pressure and after the pressure has been released. If the cylinder expands past an allowable limit (typically 10% of its original size), it must be condemned.

This testing process looks slightly different depending on the type of cylinder and whether it is a low- or high-pressure cylinder.

Once the hydrostatic testing is complete, whether it be on a low or high-pressure cylinder, it will be emptied of the water and dried. Once dry, another visual external and internal inspection will be performed to look for any new pits, cracks, or damages that may have been caused by the test.

If the cylinder passes, it will be stamped or labeled, noting the hydro test date & the pressure it was tested at, refilled, and return to service.

What Types of Tanks Get Hydrotested?

Many different types of cylinders need to be hydro tested at some point during their lifespan. These tanks include:

Most of these cylinders, including those used for fire suppression and breathing apparatuses, are required to have regular hydro testing by the governing regulatory body (NFPA and DOT) to be permitted to stay in service.

However, some, such as the paintball cylinders, may not need to be tested until they have been emptied and before refilling, even if many years have passed since it was initially filled.

When a cylinder fails an inspection, it cannot be returned to service.

Essentially, most cylinders fail due to reasons that could have been avoided if they had been properly stored and cared for.

Some older cylinders, especially old SCBA tanks, do begin to fail hydro tests due to excessive expansion resulting from the pressure applied during the test. New cylinders, however, very rarely fail a hydro test.

If a cylinder fails the inspection, the technician will fill out a form that includes the cylinder's serial number, manufacturer, and cylinder type. The serial number is then X'd out. That information will be logged into the system along with the information on why it failed the test. At that point, the cylinder is returned to the customer, who must sign the form.

Your Koorsen branch will keep a copy of the form for up to 5 years for when the DOT requests the paperwork on all condemned cylinders.

Once a cylinder is condemned, it cannot be refilled. Customers who attempt to take them elsewhere to have them filled or get re-tested will be turned away, as the cylinders failed status will be marked on it, and other vendors by law cannot perform the test again or knowingly refill the tank.

Koorsen customers have the option of returning these condemned cylinders to Koorsen to be destroyed.

How Often Must Tanks be Hydrotested?

The frequency of hydro testing depends on the type of cylinder.

CO2 and SCBA cylinders are typically required to have hydro testing every five years, though some of the newer models now only require the test every ten years. The DOT determines the timeline for hydro testing all cylinders.

Most low-pressure cylinders, such as the typical fire extinguisher, don't have to undergo hydro testing for the first time until they are 12 years old, then every twelve years after that. Wheeled unit extinguishers are required to be tested after the first 12 years, then every seven years for subsequent tests. The DOT & NFPA dictate the timeline for all extinguishers and fire suppression system cylinders.

As noted above, a few cylinder types are not required to undergo testing until it has been emptied or needs to be refilled, even if it is past the date marked on the tank.

How do I Know if My Tanks Need to be Hydro Tested?

You can check your cylinder to see when it was manufactured (usually contained in the DOT #) and when/if it last received a hydro test. You will need to know whether your cylinder type requires testing every five, ten, or twelve years so that you know whether or not it is due for one.

If you are having trouble determining whether your cylinder needs hydro testing, call your local Koorsen branch to ask about your cylinder. You can even bring it by or have Koorsen send out a technician to look at it. If it is due, you can leave it with Koorsen or allow the technician to take it back for testing and refilling.