The Top Four Causes of Fires in Schools 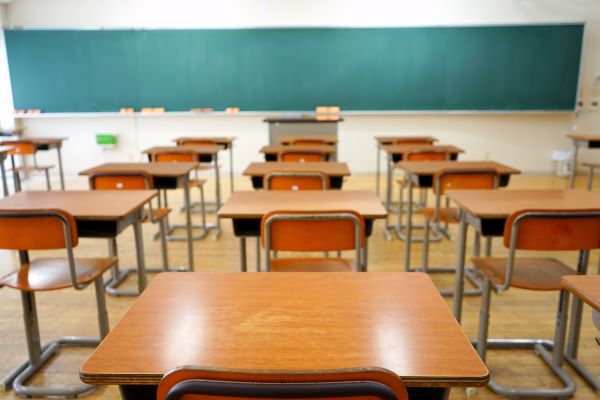 In its most recent five-year report on structure fires in U.S. schools, the National Fire Protection Association (NFPA) found that from 2013-2017, school fires resulted in a total of 212 injuries – a 32 percent drop from the previous five year period. These are remarkable numbers when you consider that during that time, there were more than 16,500 school fires reported.

On average, school fires cause $42 million in direct property damage each year. While the schools are clearly doing an excellent job at keeping children safe from fire, the communities they serve face a significant financial burden when a fire occurs.

This post will provide some of the key insights gleaned from the NFPA report to help people better understand the causes of fires in schools.

Leading Causes of Fires in Schools

For context, it may be helpful to know just how many schools we have here in the U.S.  According to the most recent data from the National Center for Education Statistics; there are 133,390 K-12 schools in the United States, which include:

The NFPA report found that from 2003-2017, most fires occurred at middle, junior and high schools (42 percent), followed by elementary schools (38 percent); preschools and daycares (12 percent); and other, non-adult schools (8 percent).

The top four leading causes of school fires were intentional fires, kitchen fires, children playing with heat sources such as matches and lighters, and fires caused by heating equipment malfunctions. Fires caused by careless smoking was also a factor in some middle and high school fires but not in elementary school fires.

The figure below illustrates that there were some differences between elementary schools and secondary schools (middle and high schools) in terms of the percentage of fires associated with each cause. However, the top four causes were the same across both age groups. In the following sections, we’ll take a closer look at each. 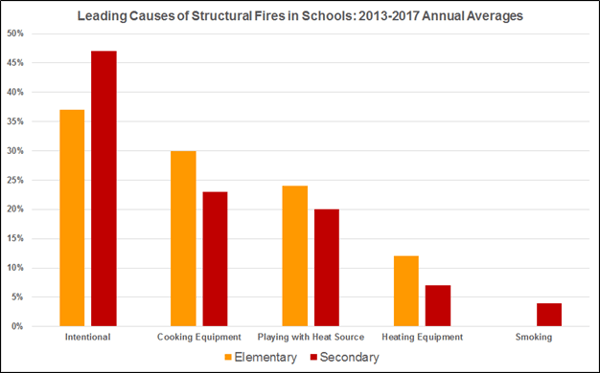 Fires set intentionally account for more than 40 percent of all school fires and cause almost one-third of the direct property damage resulting from school fires each year. A U.S. Fire Administration report, “School Building Fires (2009-2011),” lends some insight into some of the reasons young people intentionally start fires at school. According to the report, young people involved in fire setting generally fall into four groups, which are often not mutually exclusive:

The report recommends that schools immediately report all fires to the local fire service, even small fires that were extinguished quickly. The fire service can assist with identifying the ignition source and whether they were intentionally set. This can help to identify children who may be using fire in inappropriate and unsafe ways so that the appropriate intervention strategies can be implemented.

Fires caused by cooking equipment were the second leading cause of school fires but resulted in far less property damage than fires resulting from other causes. The ongoing presence of kitchen and other staff in schools is likely to be a factor that differentiates cooking-related fires in schools from those in homes  where cooking fires may be unattended and more likely to cause damage.

The report found that fires ignited by cooking materials were generally minor fires. This fact underscores the importance of ensuring that school kitchens are equipped with hood suppression systems and portable fire extinguishers and that both are properly inspected and maintained.

Playing with lighters and matches accounts for a significant number of school fires both in elementary schools as well as middle and high schools. Not surprisingly, the number of injuries resulting from these fires is much higher in the elementary schools, where children are much less likely to understand the potential risks or what to do to protect themselves when they inadvertently start a fire. Playing with a heat source accounted for 29 percent of the injuries resulting in elementary schools, while in middle and high schools, 19 percent of all injuries were due to fires resulting from these behaviors.

Heating equipment accounts for one in 10 school fires every year. These fires started in confined fuel burners or boilers, fixed and portable space heaters, central heating systems, water heaters, and other types of heating equipment.

While fires resulting from portable space heaters can be prevented with more attention to their placement and use, most other fires caused by heating equipment potentially suggest gaps in maintenance and repair of school equipment or infrastructure.

In comparison to the other leading causes of fires in schools, these fires cause their fair share of direct property damage. At an average of $2 million per year, the NFPA report serves as a sobering reminder that when it comes to fire, an ounce of prevention can go a long way to keeping both students and schools safe.

You can count on Koorsen to keep you informed when new reports are published with insights and information that you can use to help keep your schools safe from fire and security risks. Our Fire and Security team knows the unique challenges of maintaining safety and security in an educational facility and offers total protection from one source. Contact us today to learn more.

Where to Install a Carbon Monoxide Detector?
What is a Victaulic Coupling?
What is a Sprinkler Riser Room?
Fire Protection for the Deaf and Hard-of-Hearing Community