Today, the International Fire Code (IFC) provides the foundation for fire safety regulation in 42 states and the District of Columbia (Figure 1). The IFC establishes the minimum requirements necessary to protect people and property from fire and explosion hazards and their associated dangers in buildings, structures, and on premises. The IFC also provides comprehensive regulations for the storage of hazardous materials. These requirements are based on occupancy classifications, which describe the intended use for buildings or structures or areas within them. 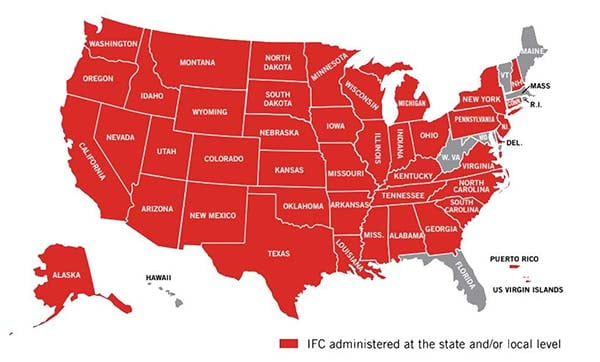 A History of Fire Code Development

The International Code Council, a nonprofit association dedicated to building safety, published the first edition of the IFC in 2000. However, the IFC is not the first and only fire code in use today. The history of fire codes goes back to the Great Fire of Rome in 64 A.D. that destroyed 70 percent of the city. In its aftermath, King Nero redesigned the city with a plan that featured wider streets, restricted the height of houses and the use of common walls between buildings, and required homes and buildings to be constructed with stone or other fire-resistant materials instead of wood. Fast forward to the late-19th century, and you see a more recent history punctuated by devastating fires that galvanized support and demand for regulation to improve fire safety in public spaces and the workplace:

These are just a few examples of how deadly fires have helped to shape modern fire safety regulations. Improvements in code have also been driven in part by insurance companies to better manage their risk and reduce their losses resulting from fires. Over the decades, changes in building materials and methods have improved our understanding of risk, and the introduction of new technologies in the fire protection industry has helped to significantly mitigate risk and continue to inform changes in fire codes.

That is why, in 1994, the National Fire Prevention Code, Standard Fire Prevention Code, and the Uniform Fire Code were merged by the International Code Council to create the IFC. The two main fire codes in use today are the IFC and the NFPA 1. And, while there remains a good deal of confusion regarding the application of the IFC and NFPA 1, together, they ensure that states, cities, towns, and counties have a strong body of code upon which they can base their regulations.

Both the IFC and the NFPA 1 are designed to be adopted by jurisdictions. They are what is commonly referred to as “model” codes, meaning that although the requirements they contain are not legally-binding regulations, they often have the force of law because they are commonly adopted into state and municipal code with few if any changes.

Model codes must first be adopted through the legislative process in the state, county, city, or other jurisdiction to become legally enforceable. Jurisdictions can adopt any or all of the requirements in either the IFC or NFPA 1, or they can combine requirements from each if they choose to do so. Jurisdictions may or may not adopt the most current edition of the code(s) they choose, which is why it is important to know which edition(s) the requirements applicable to your location and occupancy are based on.

It is worth noting that standards, such as those published by the NFPA, are not the same thing as codes. Fire codes provide the basic requirements – the “what” – while standards address the “how.” For example, both the IFC (Chapter 9) and NFPA-1 (Chapter 13.3) address the requirements for the placement of automatic fire sprinklers while both referencing the NFPA 13 Standard for the Installation of Sprinkler Systems for the type of sprinklers required and how they must be installed. When a jurisdiction adopts the requirements for fire sprinklers in either the IFC or the NFPA 1, they are also adopting by reference the requirements in NFPA 13, making them legally enforceable as well.

Cutting Through the Confusion of Conflicting Codes

Because different non-governmental organizations develop them, they often overlap in the requirements they contain, and in some cases, they contradict each other. Combined with the fact that many states and communities adopt different components of both the IFC and NFPA standards makes it critical for fire safety professionals and the authority having jurisdiction (AHJ) to know which code(s) are applicable in their areas.

Codes also continue to evolve to keep pace with emerging knowledge and technologies making it even more difficult to stay on top of current requirements in your jurisdiction. The NFPA offers an interactive tool to help you identify the NFPA codes and standards that are being used around the world as well as those referenced within IFC. However, to be sure that you have the most accurate and up-to-date information for your location, it is always best to consult with your local AHJ.

Koorsen Fire and Security can also help. Our certified technicians and engineers stay current on all the applicable regulations in their different service areas, as well as the technologies they require. We can help you navigate the complex and often confusing landscape of fire safety regulation and can provide the services you need to ensure compliance. Contact Koorsen today to learn more.

What Types of Buildings Require Fire Alarms?
What Happens During a Fire Alarm Inspection Test?
What to Include in Your Workplace Fire Prevention Plan
What Is a Fire Protection System?
Home Fire Safety Tips