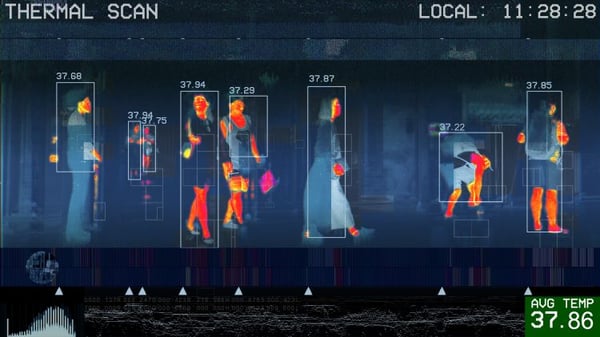 According to a recent report by the National Fire Protection Association (NFPA), in 2017; there were on average more than 13 non-residential fires in the United States every hour. And, every minute these fires burned resulted in an average of $5,350 in direct dollar damages, not including the indirect costs for cleanup and business interruption. These statistics not only underscore the importance of keeping our fire protection systems well maintained, they also illustrate the potential benefits to be gained if we can enhance our ability to detect a fire risk before a fire breaks out.

One way to do that is with thermal imaging cameras, which offer great promise for improving our ability to quickly detect emerging fire risks. Thermal imaging technology is already being used in the fire service to help firefighters identify potential fire risks when responding to automobile accidents and to find victims and localize hotspots within burning buildings. And in 2018, the NFPA published the first edition of its 1801 Standard on Thermal Imagers for the Fire Service to provide guidance and requirements for the use of thermal imagers by fire service personnel during emergency incident operations.

With their ability to help us “see” a fire before it happens and the fast pace at which thermal imaging technology is evolving, it’s no surprise to see thermal security cameras making their way into the market for the fire protection industry.

Thermal cameras measure infrared radiation – a type of radiant energy that is invisible to the human eye, but detectable in the form of heat. They use a sensor to measure the amount of infrared radiation (or heat) emitted from an object or in a given area. The measurements are then processed using specialized software to visually display the heat readings in the form of high-definition images or video. “Hot spots” or areas with higher temperatures will show up as brighter areas on the image against areas with cooler temperatures, which appear darker.

Thermal cameras are considered a “non-contact” device meaning they can monitor an area or equipment from some distance as long as their view is unobstructed. They also provide automatic alerts – when the temperature exceeds a certain limit or increases faster than it should, an alarm is triggered allowing for quicker response.

Because they can be used to detect anomalies that would otherwise be invisible to the naked eye, when used in conjunction with other fire detection systems, thermal cameras can provide a whole new level of fire protection.

Thermal imaging cameras can be used to monitor specific pieces of equipment or infrastructure such as computer servers, electrical outlets, circuit breakers, etc. to detect temperature changes that might indicate the risk of fire. They can also be used to scan large areas within a building or individual components of their infrastructure including electric, heating and air conditioning systems.

Today, thermal imaging technology is being employed to provide more comprehensive fire detection capabilities in an ever-increasing variety of settings:

Spontaneous combustion detection – Many types of businesses, including construction sites and waste disposal and composting facilities, carry an increased risk of fire due to the concentration of highly combustible materials that when combined, can generate high levels of heat. Thermal cameras offer the ability to monitor such operations around the clock to detect any increases in heat that might lead to spontaneous combustion.

Monitoring in difficult areas – Many components of a building’s infrastructure present a fire risk and often, they are located in or across areas that can make them difficult to monitor safely or effectively at all times. Thermal cameras can be used to monitor specific pieces of equipment, such as boilers and furnaces, or larger areas of a building’s infrastructure to detect any abnormal heat increases, indicating possible failures that could lead to a fire.

Operations involving open flames – Thermal cameras are also ideal in situations where open flames are used in normal operations, such as in restaurants and on construction sites. In these settings, thermal cameras can be used to monitor the situation to detect any malfunction in the equipment being used that might lead to a fire, and ensure the active fire is appropriately and safely contained.

The Benefits of Thermal Cameras

The primary benefit of thermal cameras for fire protection lies in their ability to detect the temperature anomalies that occur just before a fire starts, or if the fire has already started before the smoke can be detected by a conventional smoke detector.

The measurements produced by thermal cameras can be very precise, which allows you to not only monitor thermal conditions but to also identify and evaluate the relative severity of heat-related problems.

Unlike regular video cameras, thermal cameras do not require light to capture an image, making them ideal for use in low-light settings and at night.

Another benefit of thermal imaging cameras is that they can be used for fire detection and prevention, security, and equipment monitoring all at the same time, offering a broader spectrum of protection than standard video cameras can provide.

Thermal Cameras Do Have Some Limitations

For the most part, these limitations will impact whether thermal security cameras are appropriate for the area you want to protect. They may also impact the number of thermal cameras you will need and where you need to place them to provide the sought after additional protection. This is why it is important to understand the technology before you invest.

Perhaps most importantly, given these limitations, thermal cameras should never be used in place of standard, approved fire detection systems. Consider them an enhancement of your current system – a great new tool for your fire protection and security toolbox.

Factors to Consider When Choosing a Thermal Camera

There are a number of components that contribute to both the quality and the cost of a thermal security camera. The two most important factors are:

The temperature range is also important. This indicates the minimum and maximum temperatures that the camera can measure. Depending on the nature of the fire risk you are protecting for, this may be a critical factor in the camera you choose.