What Are the Steps in a Fire Sprinkler Inspection? 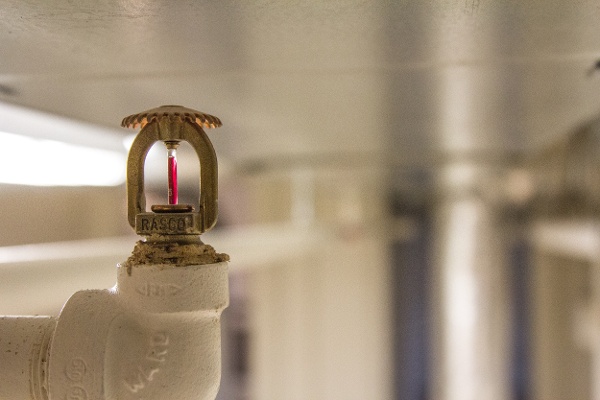 On this day, the team of two Koorsen Systems Technicians are inspecting one of the older buildings that used to be a residence back during the Civil War. While one technician is stationed at the fire alarm panel located in the basement, the second technician is in the attic inspecting the sprinkler system components. In the attic, the second technician goes to the corner of the floor where the sprinkler risers or the main sprinkler pipes that go up through the building are found. From the risers, the fire sprinkler pipes run out along the ceiling where the sprinklers are located. At the risers, there is a gauge and a butterfly control valve that turns the water off for the sprinklers located in the attic.

The first step when inspecting the sprinkler system is to test the butterfly control valve. while exercising the valve (closing) in this scenario the control valve has a tamper switch installed, the tamper will transmit a supervisory signal and or a trouble condition to the fire alarm panel.  This is to notify building occupants, owners and fire department there is a control valve closed or partially open. In the event of a fire, the water may not reach the hazard area due to the valve being closed. Once the technician in the attic confirms with the technician at the fire control panel, that the panel recognizes the valve is turned off, he opens the valve back up. Once the valve is returned to its normal position Koorsen will then place a tamper seal on the valve to ensure it is in the correct position before leaving. The tie can easily be broke in the event that the valve needs to be closed.  The seal also serves as a deterrent to keep people from tampering with the valve. 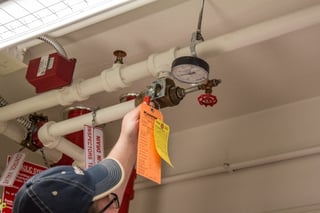 Onto the Next Building

The backflow devices were located in “pits” near each corner of the campus between the public street and the nearest building. The pits were covered with steel covers that swung back to reveal a 10-foot deep concrete pit where the backflow assembly was located.

After all inspections were completed, Danny and the other Koorsen technicians filled out the necessary documentation showing that all required inspections had been completed according to codes and regulations. These documents are for Koorsen’s own records, as well as the client’s records in case a Fire Marshal or other public official wants to check that all inspections are up to date. All the documentation is completely digital which sets Koorsen apart from the rest of the competition. The Koorsen technicians fill out all the documents on tablet computers that they carry with them. When they are finished, they are able to quickly email the client the documentation, as well as save it on a database for Koorsen’s records. This technology gives technicians and other Koorsen employees the tools needed to offer exceptional field service to their clients. 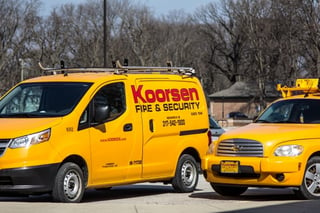 As you can see, there are many steps and processes a Koorsen technician takes to inspect and test a client’s fire sprinkler systems. Each and every step is important and must be followed precisely to ensure that a fire protection system always does its job in protecting life and property. As the face of their company, Koorsen takes great pride in having some of the best technicians in the nation. Not only do Koorsen techs provide unparalleled customer service but they are some of the best-trained in the industry. Koorsen technicians are fully certified and receive ongoing training at the Koorsen Training Center, one of the largest and most advanced training center of its kind.

To learn more about the services, inspections and products Koorsen Fire & Security offers or to schedule an inspection, contact Koorsen today.