What are the Different Types of Fire Sprinkler Heads? 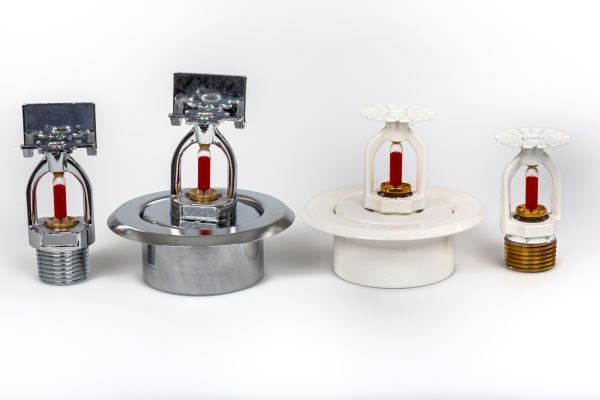 Fire sprinkler systems are easy for most to take for granted. But have you ever noticed the wide variety of fire sprinkler heads that you see in the commercial, retail, and residential spaces you visit?

There are four main types of fire sprinkler heads on the market.

But, before diving into the descriptions of those, it’s helpful to understand the basic components common to all sprinkler heads and how they work:

Glass bulbs and fusible links can be designed to respond to different temperatures. Thus, the heat-sensitive element chosen for a sprinkler head will depend on the needs and environment of the facility it is protecting.

Now that the basic components of all fire sprinkler heads have been discussed, here are the four main types that you will come across and a bit about what makes each one of them different:

While the above are the four main types of fire sprinkler heads on the market, there is still a wide variety to be found within each type, and that there are also other types of sprinkler heads for unique applications.

What Fire Sprinkler Heads Does Your Facility Need?

While there are certainly elements of aesthetic appeal that play a role in choosing the fire sprinkler heads used in your building, you must remember that each type of sprinkler head is designed to fulfill slightly different purposes and meet different needs. Some will activate faster than others, some will be much more efficient at suppressing a fire in a room full of obstructions, etc.

Before you choose the sprinkler system for your new building or renovation project, you need to understand the specific functions that each type of sprinkler head plays and know what your unique space will require for efficient fire protection.

Don’t be overwhelmed by your options. The experts at Koorsen Fire & Security can help walk you through your options and can help identify the unique needs that your facility has. Give Koorsen a call today to get started.

Taking a Closer Look at Dry Systems
Backflow Preventers – A Critical Component in Fire Protection Systems
What is a Post Indicator Valve (PIV) and Are They Required?
How Do Fire Sprinklers Work?
What is a Victaulic Coupling?