What are Escutcheons and Are They Required for Fire Sprinklers? 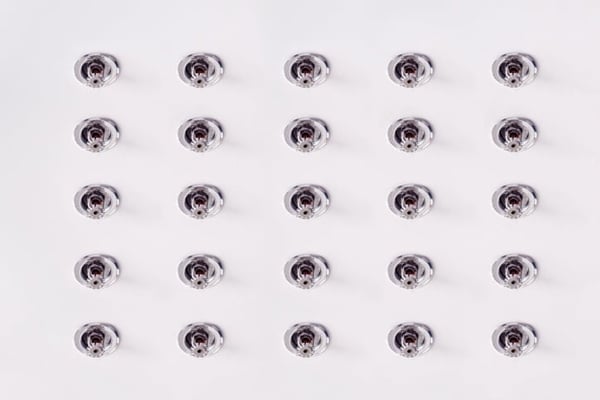 The simple answer to these two questions are:

Though the answers are simple, they seem to warrant further explanation. Of late, fire marshals have been citing an increasing number of businesses for missing escutcheons. This seems to indicate either a lack of understanding or lack of awareness about the role escutcheons actually play.

Below we will help further explain what they are, what role they play, why they are required, and other common questions our customers have regarding escutcheons.

Escutcheon plates, also known as trim plates, seal the gap between the fire sprinkler head and the ceiling.

When installers cut holes in the ceiling for the sprinkler heads, the holes are significantly larger than the sprinkler heads themselves, usually leaving a gap of well more than 1/8” between the head and the surrounding ceiling. Escutcheon plates are used to fill this gap.

Why Are They Required?

Sealing the gap with these plates is not merely for cosmetic purposes, which most (wrongly) assume is their purpose. If the gap between the ceiling and the sprinkler is not filled, both heat and smoke from a fire would escape past the sprinkler head into the space above the ceiling.

But since a fire sprinkler head is activated by heat rising to a certain temperature, its activation would be delayed if the escutcheon plates were not in place. The gap would allow heat to escape, requiring the fire to burn longer and hotter before the temperature rose enough to finally set off the sprinkler head.

Furthermore, if smoke alarms are present, their activation may too be delayed, since smoke will be able to escape through the gap left by a missing escutcheon plate. These delays could allow for serious damages and unnecessary endangerment to anyone stuck in the building.

The escutcheon plates, as you can see, play an important role in ensuring the efficient and timely activation of fire sprinklers in the event of a fire.

Now that you understand what escutcheons are and why they are required, here are the answers to five additional common questions to help clarify their proper use and handling:

Thus, the only time you should need to worry about the trim plates is if you notice that one is missing or has been damaged in some way.

2. Are There More than One Type of Escutcheon?
Yes, there are at least 3 main styles of escutcheons, with hundreds of models of each style.

The three main styles are:

Flat: This type of plate creates a flush appearance with the ceiling. It is a flat plate through which the sprinkler head snuggly fits.

Recessed: This type of plate comes in two pieces – a ring which covers over the gap, and an inner ring that fits into the ceiling, encircling the sprinkler head. It appears as though the sprinkler head were sitting in a cup. Recessed trim plates are the most common for use with ceiling tiles or drywall.

Adjustable: This type also comes in two pieces – a skirt and cup. The skirt portion covers the gap while the extendable cup allows for adjustment of the sprinkler head out from the ceiling, commonly up to 2”.

As mentioned above, while these are the three common styles of escutcheons, there are hundreds of models and versions of each of these styles, which leads to the next question.

3. Can Any Escutcheon be Used on My Fire Sprinklers?

The quick answer is: NO.

If you discover that you need to replace a missing or damaged escutcheon, you cannot simply order any style or model you choose. You will have to know the manufacturer’s brand and the exact model number of the head in order to get the correct replacement.

4. Can Escutcheons be Painted Over?

No. Just like sprinkler heads, you may not paint your escutcheons.

5. What If One is Damaged or Missing?

If you notice that one of your sprinkler heads is missing an escutcheon, or that it is damaged, you will need to get it replaced. This includes if it has rusted, been separated or bent, become discolored, or painted over.

However, the process can be extremely in-depth, even requiring that the entire fire sprinkler system be put out of service and drained, and the sprinkler head removed to allow reinstallation.

If, however, you choose a “split” or a retro-fit escutcheon plate, it will allow for easier replacement. These plates are made in the same types and models, but they split in half and allow you to detach and refasten the two sides back together (like a cuff link) around the sprinkler head, without having to shut off the system and remove the sprinkler.

However, whichever type of escutcheon used, the service must be fulfilled by a licensed fire sprinkler installer.

Worried about Your Escutcheons?

If you are missing escutcheons or notice damage or wear, it is extremely important that you get them replaced. At Koorsen Fire & Security, we have been in the fire protection industry and installing fire sprinkler systems for decades. Our team of licensed professionals can ensure the proper replacement and installation process of your sprinkler heads’ trim plates.

Ensure the safety of those in your care and keep your sprinkler system up to code by giving Koorsen a call today.

DO you have more questions about fire sprinkler requirements?