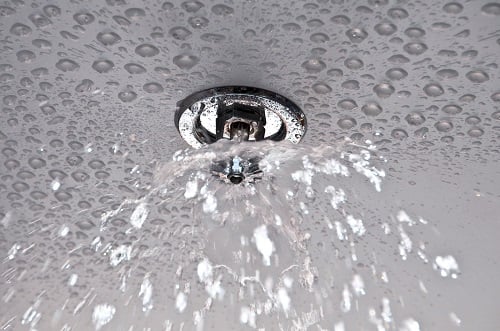 As the temperatures drop below freezing throughout much of the country, the risk of freezing water pipes is on many peoples’ minds. We’ve all heard the risks and seen the damage of a frozen water pipe bursting, but what about the pipes in a fire sprinkler system? Can they freeze and can they be “winterized”?

THE TWO TYPES OF FIRE SPRINKLERS

The second type of sprinkler system is a dry system, which can typically be found in parking garages and warehouses where the temperatures can drop below freezing. In a dry system, the pipes are pressurized with air that holds the water back from the main water line. When a sprinkler is activated, the air is released, which allows the water to flow through the pipes and out the sprinkler head.

While dry systems are less susceptible to freezing compared to wet systems in cold weather conditions, they are still capable of freezing. This is due to the fact that the air in the pipes contains moisture, which can condense in the low points of the pipes and freeze. Due to the differences in the systems, they each require their own unique steps to reduce the risk of freezing.

While most wet fire sprinkler systems are installed in buildings where the temperature won’t drop below 50 degrees, there are certain applications where they may be susceptible to freezing, like when part of the wet system is run out to an unheated garage or area that is exposed to the elements.

A dry fire sprinkler system’s pipes aren’t full of water, like in a wet system, which means there’s no need for antifreeze. The dry system is full of air that contains moisture and can condense in the low points of the system, which can freeze and burst the pipes.

During the warmer months, the fire sprinkler professional will perform an annual inspection which may include flushing the fire sprinkler system. After flushing the system with water to ensure the system is operating properly, the pipes are then blown out with air to dry them. Once all the pipes have been dried out, they are sealed and pressurized with air. A professional will usually recommend that the low points are checked and drained every few days after flushing, due to the increased moisture in the newly pressurized lines.

WHAT CAN I DO TO LOWER THE RISK OF SPRINKLERS FREEZING?

While there isn’t much else that is needed beyond regular draining and inspections of dry systems, there are additional steps that one can take to prevent a wet system from freezing and bursting.

If there are vents that are blocked or shut off, open them to allow the heat to disperse and warm the room or area where the fire sprinkler system is located. Areas that pose the greatest risk for freezing are attics, stairwells, skylights, entryways, and under floors. If you can’t control the temperatures in these areas or seal off the cold air leaks, you should insulate the pipes.

GET YOUR FIRE SPRINKLERS INSPECTED TODAY

If you haven’t had your fire sprinkler system serviced and inspected within the past year, you should call a Koorsen technician to ensure your sprinkler system is working properly and is not at risk of freezing. Regular inspections and maintenance are always the cheapest and easiest way to avoid damage from the winter cold. Contact a Koorsen Fire & Security associate today to schedule an inspection of your fire protection system.